Lions (Panthera leo) and spotted Hyenas (Crocuta Crocuta) are two of Kenya’s best-known predators and play important ecological roles within savannah ecosystems, including influencing the abundance, behaviour, and distribution of prey. Both species are also facing wide-spread declines with fewer than 25,000 lions and 50,000 spotted hyena estimated to remain across the African continent. Consequently, Kenya represents a key stakeholder for the future of these species with populations existing both inside and outside the country’s protected areas. Sadly, lion population is declining across the country and is currently listed as ‘endangered’ under the Wildlife Conservation and Management Act, 2013. Although information of the population trend of hyena is scanty, the species is listed as vulnerable under the Wildlife Conservation and Management Act, 2013. To combat these declines this document has been developed to work in congruence with current conservation efforts and is the second “Recovery and Action Plan for Lion and Spotted Hyena in Kenya”, for the years 2019 – 2024.

This action plan was developed though a consultative planning process which, in accordancewith the IUCN, CITES and CMS guidelines, was participative, transparent and informed bythe best available science. In total, more than 300 people, representing over 70 governmentand non-governmental stakeholders, contributed to the process. Considering that largeportions of lion and spotted hyena range are outside of Kenya’s national parks and reserves,encouraging ecosystem-scale conservation initiatives and utilising ongoing conservationefforts of stakeholders was deemed vital to the success of the action plan and the persistenceof both species. Leveraging the support of, and improving the coordination and collaborationamongst these stakeholders is the foundation of this strategic approach.Across the country human-wildlife conflict, habitat loss and conversion, wildlife disease,infrastructure development, and poor conservation management are ranked as the top fivethreats to lion and spotted hyena conservation. This action plan looks to address these complexthreats in a holistic and collaborative manner and aims for the following long-term vision: “Tosustain viable populations of lions and spotted hyenas in healthy ecosystems as aworld heritage valued by the people of Kenya”.

This will be achieved by focusing on five key objectives, each associated with a set of specificactions and an associated set of measurable targets to gauge performance. These are:

These objectives are bold and forward thinking and embrace the twin benefits of devolutionand collaboration to achieve country-wide conservation of lion and spotted hyena. A centralpillar to achieving this vision is the adoption of lion and spotted hyena conservation units.The devolution of responsibilities to regional committees and coexistence working groupscomprised of conservation stakeholders will create collaborative ecosystem-based institutionsto implement locally relevant activities. In turn this will provide support to KWS to achieve theultimate vision of this recovery and action plan. 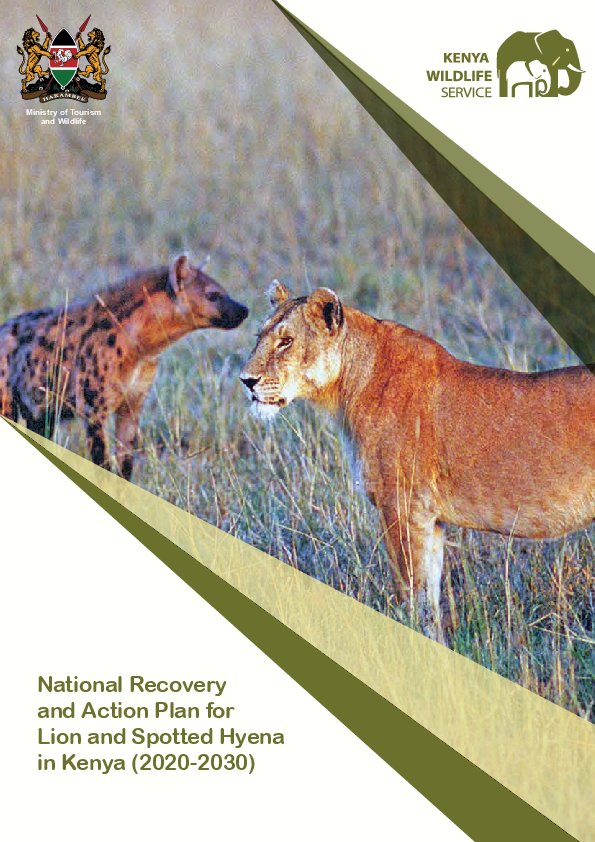