Vasha Greens, a fresh vegetable shop owned by smallholder horticultural farmers, has opened its doors in Naivasha town. The grocery sources the fresh farm produce from farmers who grow the crops sustainably to ensure less harm to the environment and in strict compliance to food safety standards.This initiative guarantees local consumers healthy and safe vegetables whose sources are traceable. The new venture, run by the Lake Naivasha Basin Sustainable Horticultural Farmers, is located in Kayole about three kilometers from Naivasha town.

Besides, the grocery boasts of a solar-powered chiller to prolong the shelf-life of the produce, providing a shift towards  sustainable production and consumption of fresh farm produce since the farmers efficiently grow crops with less impacts on the environment, building their resilience to climate change while also reducing land degradation.

The green shop is part of projects in the Lake Naivasha Basin funded by WWF-Kenya through the European Union (EU) funding under the Switch Africa Green Phase II and WWF-Food Practice innovation funds.

For their effort and adherence to food safety standards, the farmers’ group was awarded KS1758 certification, a Ministry of Agriculture standard of quality for food safety.

Kenya Standard 1758:2016 (KS 1758) is a code of practice for the horticulture industry in Kenya which provides guidelines for safe and sustainable production and supply of fruits and vegetables for domestic and export markets.

This recognition makes them the first group of farmers in Kenya to receive the KS1758 certification.

Before the sustainable consumption and production initiative began five years ago  under the Green Horticulture at Lake Naivasha (GOALAN) project, the horticultural farmers from Nakuru and Nyandarua Counties recorded upto 50% losses to post-harvest challenges, the sub-landscape coordinator said.

The green shop has also created over a thousand jobs, directly and indirectly.

"We are now sure that with this shop, we'll be able to reduce post harvest losses to 10% or even zero because farmers now have an aggregation point which is easily accessible by all since the shop is located on the main highway," added Ms Njiru, adding that increased production and income has seen the farmers employ more farmhands.

Ms Akinyi said the government has put in place adequate measures to safeguard the safety of food in the country by training farmers on  best farming practices and running sensitization programs to equip them with the latest knowledge in food production.

Lake Naivasha Basin Sustainable Horticulture Farmers Chairperson James Maina said many of their members had previously been in the hands of exploitative brokers and middlemen, limiting their access to markets.

Mr Maina said, for instance, many potato farmers had to contend with selling their commodity in a 90Kg extended bag for the price of a 50kg bag because they had little room for bargaining.

"From now onwards, we're going to sell our produce in kilos which is a huge milestone for the farmers," said Maina. 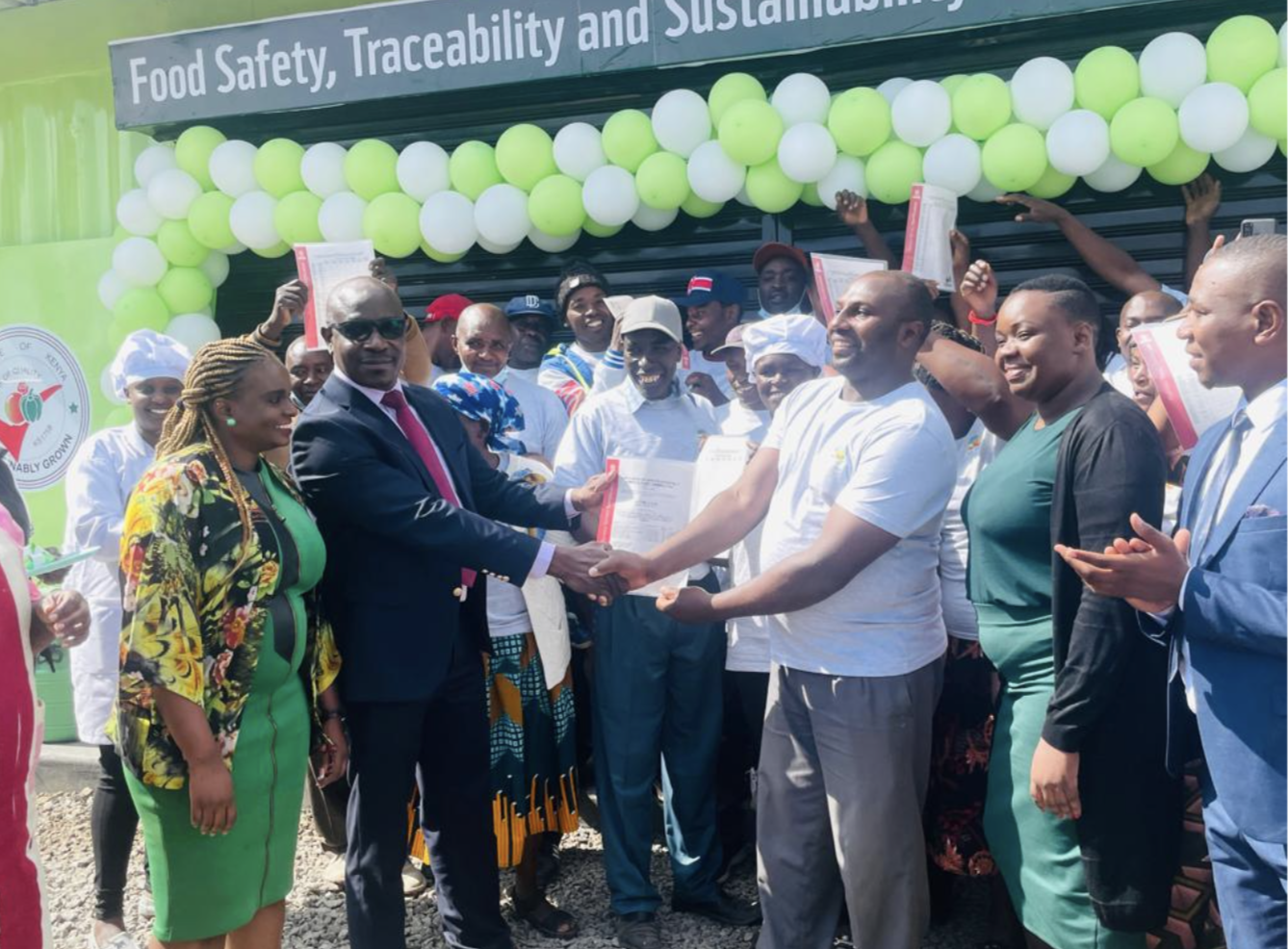 While market access remains a big nightmare for millions of smallholder farmers in Kenya and across the continent,food safety concerns also remain a huge public health threat. According to the Ministry of Agriculture’s 2019-2029 Strategic Plan, there are about 4.5 million small-scale farmers in Kenya, making smallholder farmers the backbone of the country’s marketed agricultural output.

Mr Cyprian Kabbis, the chief executive officer, Bureau Veritas Eastern Africa - an institution tasked with certification of farmers – the KS1758 mark of quality and code of practice will scale up compliance in issues dealing with plant health, food safety, workers` health and safety and environmental management for their produce.

“The KS1758 mark of quality is benchmarked and recognized on international standards hence will help farmers enhance market access locally and as well as increase their exports globally,” Kabbis said.

Further, he noted that many farmers rely on agrovets who unfortunately lack agronomic experience.

"I urge farmers to desist from using pesticides whose use are not approved in kenya. Farmers should also learn to embrace integrated pest management to minimize over reliance on pesticides, " Mr Edewa said.