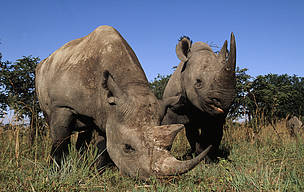 The Black Rhino, has suffered a catastrophic 98% decline across Kenya, whose population plummeted from 20,000 in 1970 to about 350 in 1983. The curve has now turned and the population stands at 750 in 2018
The development of the 6th edition of the Black Rhino Action Plan 2017-2022 is one such key document as it will guide rhino conservation agenda in the Country for the next 5 years.  The action plan is proposing a raft of progressive strategies.  Two major highlights in the document are how best to spur breeding of the black rhinos through securing new and safe habitats and minimising loss through poaching by adopting the zero poaching framework.
In what is being viewed as limiting the black rhinos breeding capacity, experts agree that the number of rhinos in sanctuaries must now be kept below their carrying capacity by removing the surplus rhinos. This they propose will spur breeding as opposed to having numerous black rhinos in one sanctuary essentially limiting their breeding capabilities. The surplus rhinos will be used as founder population to new rhino areas such as Tsavo East Rhino Sanctuary that is to launched soon.
The rhino count supported by WWF-Kenya in the sanctuaries of Nairobi and Lake Nakuru National Parks as well as the Solio Ranch will inform decisions to effect this critical proposal from the action plan.
The second critical cog is minimising loss through poaching by implementing the six pillars of zero poaching namely; assessment, capacity, technology, prosecution, community and cooperation. The assessment will ensure that each rhino area has appropriate and adequate resources, the right capacity to undertake its routine working, incorporates the best available technology in anti poaching activities as well as use of forensic evidence to tighten prosecutions. Further community engagement and regional/international cooperation will be necessary in achieving this critical cog.